Shortly after the election of November 2016, the director of the organization I worked for sent out an agency wide email. I don’t remember how long the email was, but I do remember the core message – “don’t discuss politics at work”.

This is a stance we see frequently in the workplace, particularly in government agencies. It’s a stance that reinforces the concept that it is possible to be nonpolitical in the office.

This concept is a myth.

Because not allowing anyone to talk at work about what had just happened in our country? Sent a very clear political message to a large number of people. 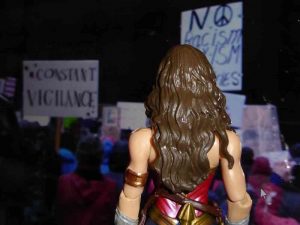 I went to a diversity training a few days after the election.  It was a voluntary training, so everyone there was invested in ideas of equity and inclusion, and eager to have conversation.  There was a wide range of races & ethnicities represented, as well as a number of individuals from the LGBTQ community.

The trainer, being a highly experienced individual, knew we couldn’t do the work unless we addressed the elephant in the room. So he allowed space for people to talk about the election.

I don’t know if I can adequately express what it felt like to be in that room. It was a safe space, and that meant that people spoke their truth. And their truth was fear. Intense, heart-breaking fear. Fear of what the future held, fear of losing family members, of continuing to be treated as less than, of increased violence or disenfranchisement.

But what particularly stood out to me was a woman who spoke of going to work the day after the election. She was devastated. She knew she wasn’t supposed to talk about it. “No talking about politics”. So she stayed at her desk all day, with her hoodie over her head, to make sure her co-workers couldn’t see her crying.

I belonged to a diversity discussion group at work as well. One day, we met shortly after the news came out about two separate police shootings of young black men. One of my colleagues, himself a black man, had to force himself to leave the house in the morning. And as he shared his heartbreak with us, he said something that has stayed with me. “I had to go to work and pretend nothing had happened,” he said. He knew talking about it it would make his staff uncomfortable. He knew they would call it unprofessional. He knew they would call it political. 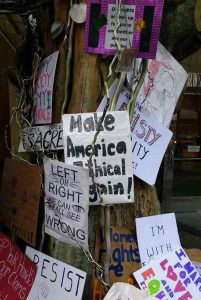 I taught conflict navigation classes at work, and during the class we would show a video related to having difficult conversations. The video highlighted that silence did not mean safety. That if you didn’t say anything, you were still making a choice that would impact your relationship and ability to work together. We never had a single person question this concept.

So why do so many people think that silence equals safety when it comes to politics?

It’s the exact same concept. By not speaking, you are saying volumes.

In recent years, any time a casting announcement goes out about people of color or women being in lead roles in a big movie franchise, there is a very predictable response from a large number of people.

“Ugh,” people will say in the comments. “Why do they have to make it political?”

It’s such a common and exhausting refrain. They are calling people of color and women political. And implying that the default – white male – is not.

And that’s why being nonpolitical isn’t possible. Because the dominant culture has decided that if someone who is marginalized speaks up, or even just exists in a space that has not previously been acknowledged as theirs, they are being political. If you are political by existing, than they sure as heck are political by not wanting you to exist.

Does this mean I think we need to be debating government policy at work? Of course not. There’s a good reason we can’t hang flyers for a particular party or politician in our cubicles, or walk around gathering signatures during work time.

But we live in a time when politicians are literally trying to deny or erase the existence of some of our communities. And pretending that politics doesn’t infuse every aspect of our lives is both naive and damaging. There comes a point where a line does have to be drawn. You can choose to make space and advance those who are marginalized. You can choose to support communities that are being oppressed. You can choose to be a part of an organization that prioritizes what is right over what feels comfortable.

But if you believe in silence, just know, you are reinforcing a state where dominant voices are the only ones heard. Disengaging supports the status quo. It’s a choice. And it has an impact.

There’s no such thing as nonpolitical. Not right now. 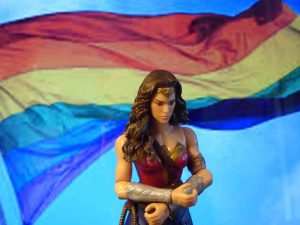