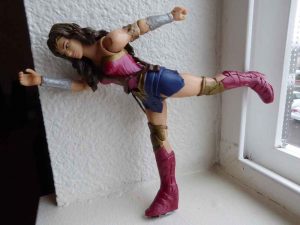 This weekend, a friend and I went to see the local ballet perform Cinderella. And naturally, the dancing was phenomenal. The sets and costumes were beautiful. The symphony was flawless. And yet, I walked away with an uncomfortable feeling in my stomach.

For a long time, Cinderella has been a problematic fairy tale for me. Largely due to the concept of the “ugly” stepsisters. Of course the point of the tale is that inner beauty is what matters – the artistic director of the ballet even came out ahead of time to emphasize this.

Yet for the majority of interpretations of the tale, the “ugly” qualities of the stepsisters are not just in their behavior. It’s yet another example of the trope that not being conventionally attractive on the outside equals an unpleasant or immoral inside.

And in this case, the ballet takes this even one step further. They cast male dancers.

Now, to be clear, I think a ballet where men get to play traditionally female roles and vice versa would be amazing. The Oregon Shakespeare Festival did a rendition of Oklahoma last year with two female leads, and I find that kind of interpretation so refreshing.

But that’s not what was happening here. This wasn’t out of the box thinking. They were cast because it was a shortcut. An easy and predictable way to emphasize the otherness of the sisters. A way to tap into the social assumption that there is something inherently hilarious about the idea of a man with feminine attributes.

The sad thing is that when it came to ugly qualities, the behavior of the sisters was immature and occasionally unkind, but the majority of the joke was how they looked. They danced badly. They fell down. And other men would shudder when they saw their faces.

And the audience ate it up. Why wouldn’t they? Our culture has decreed that men in dresses are for laughing at. Women who don’t meet society’s expectations for attractiveness are supposed to be mocked. If you’re not inherently talented, you’re funny for trying. And we only want to root for the graceful, pretty, delicate “real” woman to win the prize. It’s the message that’s all around us, all the time. Why would we question it?

So what does this have to do with leadership, you may be asking?  A lot, as it turns out.

In the leadership program I ran, we used an activity called “Stepping Into Someone Else’s Shoes”. We would hand out a survey for participants to fill out anonymously. We’d collect the surveys, mix them up, and hand them back out for debrief. This way every person knew they were representing someone else in the room, but didn’t have to disclose any information about themselves.

These were a few of the items on the survey:

Do you see the connection? What they all have in common?

They’re all about hiding, assimilating, going with the dominant crowd.

We’ve all done this at some point in our lives. Laughed at the joke that hurt, brushed off the comment that stung, even parroted toxic words to show that we’re a part of the crowd. Because standing out isn’t safe. And this happens in the workplace all the time.

When I was a manager, I learned that one of my employees had been in a stall in the restroom when a couple of other staff had come in, and without knowing she was there, started laughing about her weight. They had talked about how awful they thought it would be to look like her. She had been devastated and taken sick time for the rest of the day.

I was livid. And I wanted to know who they were. But she wouldn’t tell me. They were workers in a higher classification, and she didn’t want to rock the boat. She didn’t want to stand out. She didn’t feel safe. In the end I asked our branch manager to send out an office wide email about unacceptable behavior. But it wasn’t the same as true accountability. And I very much doubt that any behaviors changed. They didn’t get hurt. Why would they think about their message?

If you talked to the manager I had when I quit, he would tell you that he cares a great deal about equity and inclusion. And I believed that for some time. Until I had a conversation with him where he asserted that women were as much of a problem as men in the workplace when it came to the issues of MeToo. His evidence for this?  Conversations he’d had with other men in the elevator.

As a woman in the workplace, it was a gut punch to hear that from the man directly in charge of my professional life. But I didn’t say anything. I couldn’t.

Later on, another co-worker who wanted to be supportive ended up telling him I had been upset by this. His solution was to call me into a conference room, with no heads up on the topic. He started by apologizing, then ended up doubling down by saying he had been googling articles on the topic that supported his stance. Needless to say, I left that meeting feeling even more crushed than before.

The sad thing is, that first incident, it wasn’t intentional. He was just chatting. He didn’t think about the bias in his words. He wasn’t considering the message. He was just going with the dominant narrative, his narrative. Why would he question it?

But here’s the thing. If you’re a leader – you should.

We live in a world where you cannot pretend that your messages don’t have an impact. And let’s be clear – they’ve always had an impact. It’s just often been easier to ignore.

And this isn’t just about one joke or one comment. It’s about all of the jokes and all of the comments. It’s about a world where a person in power who is racist, sexist, and corrupt will still be insulted for how he looks more than anything else. Where a woman who speaks out gets called ugly and fat, because that’s considered the worst possible insult. Where people who are trans are misgendered and disparaged. And where, just like at the ballet, children are watching it all.

Casting men in the roles of the stepsisters has long been a tradition in ballet. And most productions follow suite. It’s not due to any malice. It’s just how things are done.

But that’s not a good enough reason to keep doing it. Gender fluidity and trans people are not jokes. How someone looks has nothing to do with their skills, abilities, or values. It’s time for a new narrative.

The message matters. What’s yours?

**For a fantastic perspective on this topic, please check out Council of Geeks video on The Problem is Patterns in relation to LGBTQ+ representation.