Judge: I hope counsel does not mean to imply that this court is bigoted.

Henry Drummond: Well, your honor has the right to hope.

Judge: I have the right to do more than that.

Henry Drummond: You have the power to do more than that.

This past week a story broke about the screenwriters for the movie Crazy Rich Asians, and its upcoming sequel. Writer Peter Chiarelli, a white man, was the first brought on to adapt the book into a screenplay. Once director Jon M. Chu was onboard, he hired Adele Lim to co-write the script.

Considering the massive success of Crazy Rich Asians, a sequel was an obvious step, as was bringing back the same two writers.

And here is where the power dynamics come into play.

Lim, once she found out about the discrepancy, walked from the project.

To me, the most telling part of all of this is the quote from the supposed industry insider who says the salaries were “industry-standard established ranges based on experience and that making an exception would set a troubling precedent in the business.”

Because once again, this is the perspective of many people in power, and once again, they are deliberately ignoring the reality of power differentials in the workplace.

The “industry-standard” is that white men make more. Standard is not the same as good, just, equitable, or fair. But what’s worse is the idea that raising Lim’s salary would have set a “troubling precedent”. We can all read between the lines here. It’s not a subtle code. What is so very troubling to the highest level executives in the most lucrative industries is the idea that they might have to actually pay women, people of color, and especially those who are both, what they deserve.

It’s not about talent or experience. It’s about the power.

Recently a study on gender equity in the sciences found that although women make up half of the students in the life sciences, when it comes to career advancement and influential positions, the number drops sharply.

“The findings back the view of many women in science that more must be done to address the problem of the “leaky pipeline” – where women leave the profession due to problems such as harassment and issues around promotion and pay.”

In other words, what happened to Adele Lim happens to women throughout multiple industries. And it has an impact.

I feel like this quote from Dr. Wade in the article encapsulates the issue so perfectly. As she says, “There is no point in encouraging more girls into science if the system is set up to exclude them.”

This isn’t about specific sexist or racist individuals. This is about a system. This is about all the varying departments, policies, and procedures that exist within a framework that was never designed to be truly equitable.

And there comes a point where we all have to face the fact that relying on the goodness of the people benefiting from that system will never be enough.

There’s a very common response whenever someone comes forward on social media about experiencing harassment or discrimination at work.

It’s no coincidence that the people most likely to repeat this refrain are those who benefit the most from existing power structures. They get treated well within the current system, so for them it’s a no-brainer.

But for everyone else…it’s not so simple.

If you stay with the same organization long enough, chances are you will have some encounter with HR.

A few years into my employment with my agency, I ended up testifying in a legal action on behalf of a former boss. He was suing for wrongful termination, and I was asked to come speak about my experience as his employee. I was extremely nervous, so I don’t remember a lot of details. But I do remember answering a question as to my understanding of state policy, and then looking to my left, where the head of HR was sitting. And he made a face.

It was one of those exaggerated “oh, really” kinds of faces. The kind of face you might make if someone bragged about their ability to juggle while riding a unicycle through hoops of flame. He immediately started writing something on his notepad, as if I’d just spoken some shocking revelation, rather than just saying I wasn’t familiar with a particular policy.

I was an admin employee, way below him in the chain of command. I was in a vulnerable position, but trying to speak honestly. And the most powerful person in HR made a face at my words.

But if I’d gotten harassed at work, he’d be totally safe and believe me, right?

This experience ended up being the tamest of my negative HR interactions, but it taught me very early one in my career to be very careful around those with power. And yet, I had all the protections of my privileges. I made it ten years. I know a lot of people who didn’t.

But this narrative operates from a critical assumption. That those who are not actively harming you have your best interest at heart. That there is nothing inherently wrong with the system itself, and you just need to find the right well-meaning advocate to protect you.

It’s a faulty assumption. Systems of power and inequity are everywhere, and if you don’t have people in power explicitly working against them, then they are supporting them.

The truth is, in our current system, HR is not there to help you. I’m sure there’s a great many really nice HR workers in the world, but the system itself is there for one thing – to protect the organization. And if that means silencing a worker making waves, that’s what’ll happen.

The same can be said for a great many managers. They didn’t get to their positions by being bold and brave. They got there by toeing the line.

In most organizations, the majority of those at the highest levels do not have your best interest at heart. And they will not willingly disrupt their own power.

So we have to do it for them. 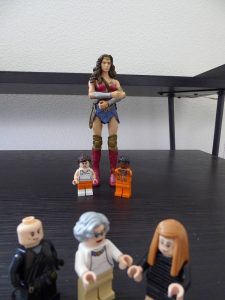